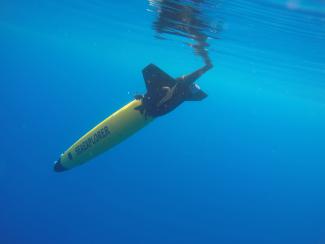 Ocean gliders are autonomous underwater vehicles used for ocean science. They travel in the sea water by changing their buoyancy and attitude in order to successively dive up and down in order to sample the sea water and collect oceanographic data. Gliders typically profile in a saw tooth pattern from the surface to 500-1000 m depth, travelling 3-6 km in the horizontal at a speed of about 1 km/h in every dive cycle. They are operating extensively for sustained observations both in coastal and open seas collecting information of physical parameters like temperature, salinity, dissolved oxygen, chlorophyll, etc. along predefined transects. The recorded data are transferred to the data center of HCMR though satellite.

The institute of oceanography, HCMR - Department of operational oceanography, owns two gliders which can descent down to 700m and 1000m depth.